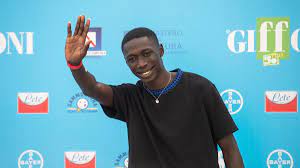 The famous Khaby Lame, born in Senegal in 2000, rides the famous red carpet of the Venice Film Festival.

He is the most followed Tiktoker in Europe and the second in the world to reach 110 million followers.

He was a mason, window washer, waiter… In March 2020, Italy is experiencing its first lockdown and all its dramatic consequences. At the age of 21, he found himself overnight, unemployed, locked up in social housing on the outskirts of Turin with his parents and four brothers and sisters.

To overcome boredom, he started having fun on the Tik Tok app. He then became a star in just a few months and all this without uttering a single word in these famous videos.

Some of his videos sometimes exceed 200 million views. Today, he has an agent who manages his partnership requests. He receives up to 500 emails a day for collaboration requests. For a post on his part, which can reach 3 million interactions in a week, he is paid between 70,000 and 180,000 euros.

An Italian producer even offered him a film script. His dream would one day be to tour with Will Smith and he firmly believes in it…

Guide to Creating a Digital Marketing Strategy: What Should You Know?

How to Implement & Succeed With Marketing Automation